For over four decades, a porch in Woods Hole has been a place for science

Some consider the porch at Walsh Cottage a sacred place, and former Fellow Joel Miller felt fortunate to study there, a spot where hundreds of top-flight young scientists like him have come to learn.

For 60 years, future oceanographers, physicists and mathematicians have gathered for a WHOI-sponsored fellowship to debate how water and other fluids move on Earth and in the atmosphere, a field called geophysical fluid dynamics, or GFD.

Uncomfortable in the hot, cramped cottage, students spend most days hunched at desks on the porch, acquiring the nickname “porch people” from some Woods Hole residents. Miller, a regular on the porch who spent hours figuring math equations, said he didn't mind the name. He was simply grateful for the fellowship opportunity. “We’ve got some of the greatest scientists in the world here, and we get to sit around asking them questions, no matter how stupid the questions may seem,” said Miller, a 25-year-old University of Cambridge student at the time of his fellowship.

Little has changed about the porch or the program since 1959, when two WHOI employees, George Veronis, of Yale University, and Willem Malkus, formerly professor emeritus at the Massachusetts Institute of Technology, began the fellowship to bring together scientists and students for an intense summer of learning.

In more than four decades, the program has graduated over 500 alumni. Today, many hold positions at universities worldwide, working on problems such as predicting hurricanes or curtailing chemical spills. The focus of 2003's fellowship, non-Newtonian GFD - the study of mud, lava and fluids other than water - had additional applications in the food and hygiene industries. Scientists can use principles of GFD to develop products such as plastic wrap and toothpaste.

Over the years, dozens of former students have returned to the cottage on Challenger Drive to teach new students and discuss their research.

“The most exciting thing about the porch is the amazing amount of science that has gone on here,” said Julia Mullarney, a former graduate student at the Australian National University and one of three women and six men who received fellowships in the summer of 2003. “The people that sit around here chatting have gone onto great things. You could trace a lot of (research) papers back to this porch.”

For most of the students, the opportunity to hang out on the porch, scribbling formulas on portable chalkboards with senior-level scientists, is akin to meeting a favorite rock star. Among the staff have been Veronis, as well as University of British Columbia associate professor Neil Balmforth, New York University assistant professor Oliver Buhler, late Stanford University professor Joseph Keller and University of Texas professor Phil Morrison.

“Anyone who is anyone in this field has been to the summer school here, so I felt I should too,” former Oregon State University graduate student Christopher Wolfe said of his decision to attend the fellowship.

Each year the steering committee of the program selects a theme and chooses a director, who then invites a principal lecturer and other staff to make presentations and work with students. In all, there are about 60 people involved.

The fellowship is taxing. Students are expected to complete a research project under the supervision of the staff and present a lecture at the end of the program. The students’ edited notes eventually become a central part of an annual volume. To complete all this work, days often end long after midnight. (“We survive here on coffee and Mountain Dew,” Miller noted).

Seminars held during the program are highly interactive; speakers must be prepared for probing questions, not only on the technical details of the work, but on the fundamental assumptions and approximations that specialists often take for granted.

For many of the students, this intensive, cross-disciplinary style of doing science represents a striking departure from the group meetings and weekly seminars at their home institutions.

“You come here and are exposed to a variety of things. It’s eye opening, and sometimes belittling, and it makes you realize how narrowly focused you have been in your research,” said Neil Balmforth, who completed the fellowship in 1990. He has since directed the program several times.

Much of this learning takes place on the sun-bleached porch planks. Students’ pride in their environment is evident. They pose for photographs on the porch. A sketch of the porch decorates their T-shirts. A picture of the porch is even featured in an introductory geophysical fluid dynamics textbook, along with the description that the GFD program has “single-handedly been responsible for many of the developments of geophysical fluid dynamics.”

Former Co-Director Phil Morrison compares the lively debates and new scientific paths charted during porch discussions to a spiritual experience. “This is like a little church, a sacred place,” he said of the porch.

The GFD program continues to receive funding from the National Science Foundation and the Office of Naval Research, so the fellowship will continue to use the porch. Veronis said he would not dream of departing from Walsh Cottage. He has even turned down opportunities to move the science fellowship to more modern, spacious quarters.

“It forces intimacy between people,” Veronis said of their facility. “It’s an integral part of what makes this place special.” 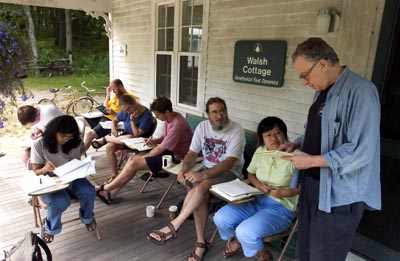 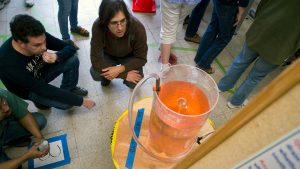